eMELT, with estimated first delivery at the end of 2023, is developed to compete with traditional manufacturing industry in terms of both cost and quality. eMELT is based on proven technology from Freemelt ONE, which is complemented by industrial solutions that are developed in close strategic collaborations with selected industrial partners within our prioritized verticals and especially in titanium and tungsten.

"With eMELT, we take 3D printing to a new level. eMELT has, among other things, higher beam power compared to other systems on the market. This, together with our recently launched software Pixelmelt, allows the customer to optimize the melting process reducing production costs while allowing for better quality and higher production capacity. Thus, we are alone in being able to offer a solution that competes with traditional manufacturing in several areas,” says Daniel Gidlund, CEO of Freemelt.

Manufacturing of titanium implants is an area where 3D printing is growing rapidly. Every year, more than five million hip and knee surgeries are performed globally. Today, a major part of all advanced implants are 3D-printed. Last year, 300 3D-printers were sold to the implants industry, which shows that it is a well-established technology in strong growth.

"When it comes to implants, we know that a 3D-printed knee or hip joint leads to a better quality of life for the patient. This is because a 3D-printed implant with Freemelt's technology has a better ability to attach to the bone than a traditionally manufactured implant, which in turn means that patients minimize the risk of having a revision operation later in life," says Per Woxenius, COO at Freemelt.

In addition to manufacturing of implants, eMELT can also be used to manufacture components in tungsten and copper. The market for products developed in these materials is expanding rapidly. Large-scale applications include renewable energy, medical technology and the transition to electrically powered vehicles and aircraft.

"We work closely with our customers to develop new materials and solutions in Freemelt ONE. For example, we see that 3D-printed copper parts produced with our technology provide higher conductivity, which creates significant added value to customers focused on heat exchangers and electromobility," says Ulric Ljungblad, CIO and continues:

" eMELT enables production of components in titanium, copper and tungsten using 3D-printing to a cost that was previously not possible. This is important in for instance the development of fusion power, an area that is growing extremely fast and that requires materials such as tungsten which can withstand extreme temperatures. For this application, Freemelt has a manufacturing technology that is superior to other methods and thus can take a leading global position." 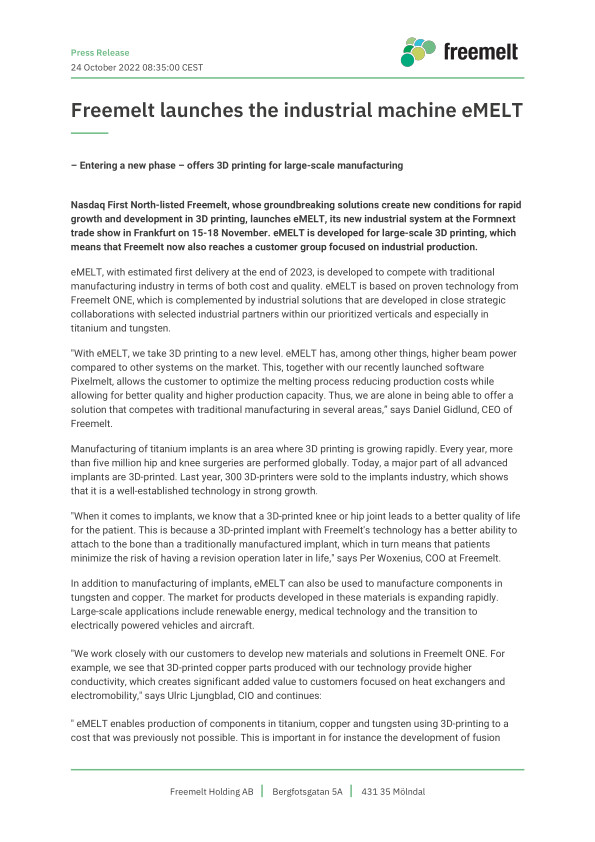